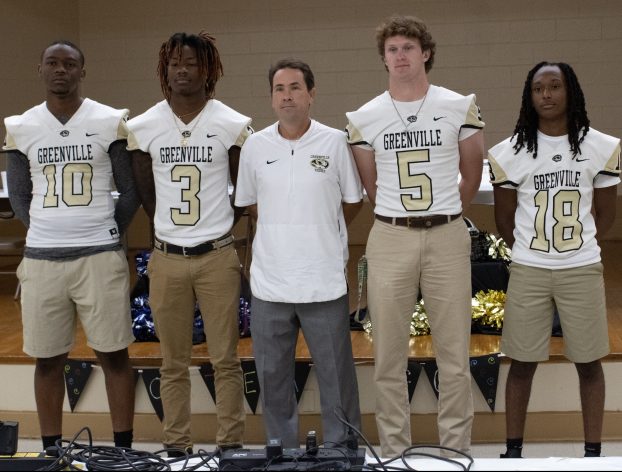 As the longest standing head coach within the county, Greenville Head Coach Josh McLendon kicked off the first round of questions during the live Q&A session of Greenville Kiwanis Club’s Coaches Corner event.

After experiencing what was described as an uncharacteristic 4-6 record last season, Coach McLendon was asked what he attributes to the previous season’s losses and how he thinks this season will shape up for the team.

In response, Coach McLendon reminded attendees that everyone suffered last season due to the ongoing COVID-19 pandemic.

“Last year was tough on everybody,” Coach McLendon said. “We started the season at 4-0 and got hit with some COVID-19 issues. Some of our players needed to quarantine, and that hurt us. But that’s behind us. We are in a new year with a new group of players, and I’m excited to see what these guys are ready to do.”

In addition to expressing his thoughts about the upcoming season, Coach McLendon responded to a question regarding the strength of the team post-graduation and how the team plans to approach the intense matchups in this season’s schedule.

According to Coach McLendon, although graduation impacted the team, those who remain are stepping up to do what they need to do to bring home the wins.

“We graduated a good group of guys,” said Coach McLendon. “Some of those guys played for the team for four years, and that hurt, but you have to be ready to reload. And that’s what we’re going to do.”

“Our schedule this season is demanding, but it’s always been that way. I believe you should go out and play teams that are going to make you better. Sometimes it’s hard to schedule games because you have gotten to the point where everyone wants to be undefeated throughout the season and play someone they know they win against. But that’s not my mindset. We want to play teams that will make us better.”

During the final round of questions, Coach McLendon expressed his hope that the team makes the most of every moment this season.

“Every week is a little different, but we need to remember to take it for what it’s worth and be thankful for what we have,” Coach McLendon said. “These times go by so fast. I want these guys to enjoy the moment and not get ahead of themselves.”