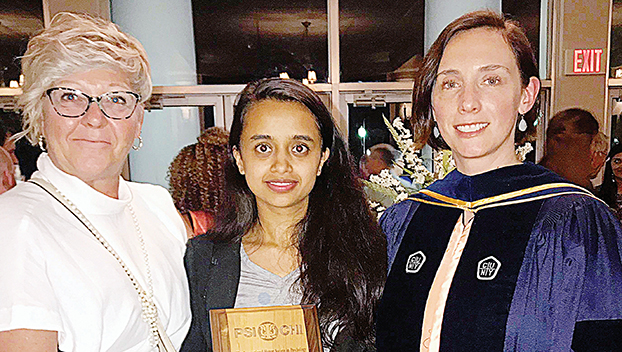 A young Butler County woman whose positive spirit and strong belief in creativity and education inspired many during her lifetime, has been honored by Troy University.

The four-year institution recently renamed the award for the psychology student who is top in academics, changing it from the Psi Chi Award to the “Chelsea Rae Huggins Memorial Psi Chi Award for Outstanding Scholarship in Psychology.”

In October 2010, Huggins, 18, was a passenger in a Jeep that left the roadway and crashed. The serious accident left the McKenzie teenager paralyzed from the chest down. She spent the next four months at the Shepard Center, a spinal cord and brain injury rehabilitation hospital in Atlanta, Ga.

While being treated for her injuries, Huggins unexpectedly discovered a love for painting. Due to her paralysis, she was forced to paint holding her brush in her mouth.

Following her newly found passion for painting, Chelsea created her own line of artwork, Mouth Art by Chelsea Rae Huggins. Many of her paintings found places of honor in local homes and offices.

“In spite of the tremendous physical hurdles she encountered, Chelsea’s artwork always seemed to express joy and optimism, and it really struck a chord with those who saw it,” her sister-in-law Madison Huggins, who was on hand for the presentation of the award, said.

Huggins graduated from Lurleen B. Wallace Community College in May 2017. In the fall of 2017, she began attending Troy University, pursuing her bachelor’s degree in psychology with plans to get her master’s as well. She drove herself to school every single day using a specialized vehicle and continued to paint and participate in art shows and festivals to share her artwork with the greater community.

On October 15, 2018, at the age of 26, Huggins was in a second accident — this one claiming her life. The Huggins family has plans to further memorialize this beloved family member while helping other students.

“In honor of Chelsea, we would like to start this fund to raise money for a scholarship,” Madison Huggins added. “Chelsea was a huge advocate for education and thrived on knowledge. In fact, she was awarded Student of The Year by the State of Alabama in 2017 and was inducted into many scholastic societies throughout her time at LBW and Troy. It is only fitting we establish a scholarship in her name to help others striving to better themselves through higher education.”

Candidates will need to submit a variety of criteria to be considered for the award. Any students interested in applying for the scholarship are asked to contact madison.huggins@yahoo.com for additional information.

“It would take so much more than a few words to fully explain Chelsea’s character, strength and determination and the positive influence and impact she had on countless lives,” Madison Huggins concluded. “We are so proud her legacy will live on through this award at Troy and through the scholarship we are establishing.”