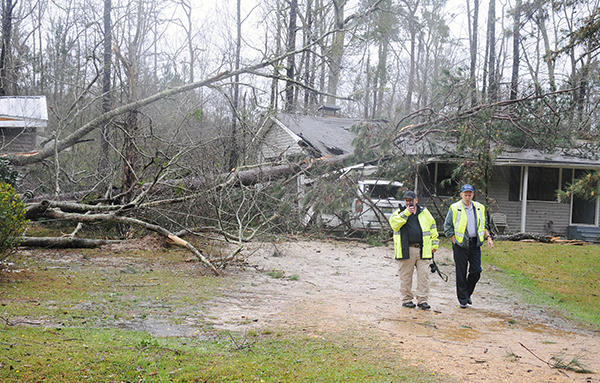 Sunday’s weather wreaked havoc across the region and Alabama was pounded by storms that killed more than 20 people.

According to the American Red Cross, there were 39 confirmed tornadoes across Alabama, Georgia, Florida and South Carolina. In Lee County, 23 deaths were reported. Initial reports indicate that hundreds of homes across the state were damaged or destroyed, including several in Butler and Crenshaw counties.

In Butler County, firefighters and Butler County Sheriff’s Office deputies were dispatched shortly after 2:30 p.m. to Steiner Store Road near Kirkland Road in the Spring Creek community where a tornado had damaged homes and property.

“I heard the warnings going off,” Spring Creek resident Brenda Bryan said. “It hit — it was too quick to be scared. I didn’t know what happened. Things were falling and crashing.”

A large tree was toppled during the storm and landed in the dining room of Bryan’s home crushing her furniture and her car.

“It’s OK,” she said minutes after the fallen tree sent items scattering across her home. “It can be fixed. God is good, I’m fine. My daughter saw the damage and came in here screaming for me.”

As neighbors hugged Bryan and a tree service began cutting the fallen tree down, neighbors talked about the storm.

“We were just down the hill and we never heard anything,” Renee Goss said. “We heard warnings and went into a safe place. When it was over, we wanted to come out and check on people. We came to make sure everyone was OK.”

Bruce Perdue, a volunteer and treasurer of the Spring Hill Volunteer Fire Department, said the area has seen tornadoes before.

“It’s been a few years since we’ve seen a tornado through here,” he said. “This is a real close community. We wanted to check on everybody.”

Butler County Emergency Management Director Kris Ware said a National Weather Service team was in the county Monday to determine if the storm was indeed a tornado.

“The National Weather Service confirmed that at around 2:34 p.m. an EF-1 tornado with winds of 90 mph touched down in the area,” she said. “The tornado was 50 yard wide and traveled a little more than a quarter of a mile.”

Ware said two homes and two barns were damaged in Butler Count, along with numerous trees and power lines.

In neighboring Crenshaw County, EMA Director Elliott H. Jones said the National Weather Service determined that an EF-1 tornado had ripped a swath of damage through the county. The tornado was separate from the once in Butler County, though both sites were within two miles of each other.

“At approximately 2:30 p.m., Crenshaw County received a storm cell that contained both powerful rotating and straight-line winds, he said. “After producing a tornado in Butler County, the storm cell entered our county and produced a tornado that struck the Danielville community.”

Jones said after meeting with representatives from the National Weather Service in Mobile, it was determined that a confirmed EF-1 tornado with wind speeds of 90-95 mph had touched down just west of Moseley Mill Road.

“The tornado destroyed a mobile home shortly after touching down and continued on an eastern path, crossing over the Bowden Road area before dissipating,” Jones said. “Powerful 80-mph, straight-line winds continued across the county causing more damage, including another mobile home on White Road that was pushed off its foundation. A shed behind the home was also destroyed.”

No injuries were reported in Crenshaw County and the same cell continued to the Lapine Highway area close to the Pike County line.

According to Jones, downed trees in the path of the storm blocked multiple roads. Several volunteer fire departments, including Honoraville worked the Crenshaw County scenes.

“We were so blessed that we had no serious injuries or deaths from this storm,” Jones concluded. “Homes can be rebuilt and downed trees can be cleared, but a life cannot be replaced.”