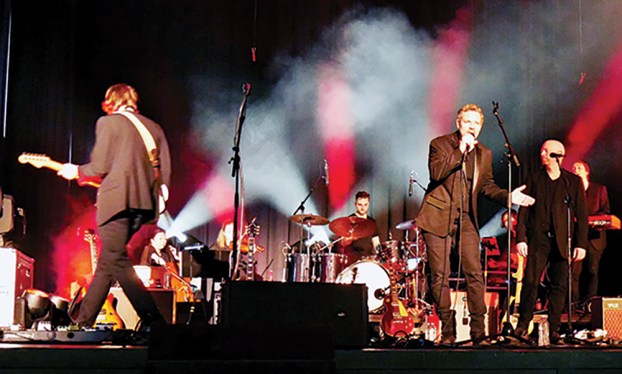 It was an electric evening in the Camellia City last Thursday night — from the gleam of the neon signage at the Ritz to the array of amped-up guitars on its stage — the excitement of the audience filling the historic downtown theater’s seats was monumental.

The Greenville Area Arts Council bid farewell to its 2018-19 artistic season with the return of crowd favorites, Black Jacket Symphony.  This time around, BJS brought the music of the legendary Eagles to local fans, who responded with whistles and whoops, often clapping and singing along with the group’s many hits. As with their previous performance in Greenville of Fleetwood Mac’s “Rumours” album, BJS brought with them an elaborate light show for a concert experience of a caliber rarely seen in a small town.

“It was truly an electric evening in Greenville and if you missed it, you missed a wonderful night in our hometown,” Nancy Idland, GAAC’s artistic director, said.

The first set of the concert featured the iconic “Hotel California” album in its entirety, including the title track and the hard-charging “Life in the Fast Lane,” conjuring up the decadence of the party-hearty ’70s.

Following an intermission, the eight band members, along with two string players, returned to the stage to perform a number of the band’s great hits from their other albums, among them “Lying Eyes,” “Take it Easy,” “Already Gone” and “Witchy Woman.”

After a standing ovation, BJS returned to the stage to perform a few more songs, including “this one written by a guy from just up the road in Montgomery – ‘Southern Cross.’”

Prior to the concert, many attendees dropped by the lobby of First Realty of Greenville right across the street where a lavish array of savory hors d’oeuvres, sweet treats and refreshing libations awaited them. Arrangements of the city’s own trademark flower, the camellia, graced the tables, with single blooms also taking their places of honor and drawing many admirers.

“The reception to our entire season by our audiences has been outstanding this year and we are already looking towards next season,” Idland concluded. “Coming up in just a couple of months – we have ‘Putting on the Ritz,’ our wonderful annual fundraiser. See you all in April.”