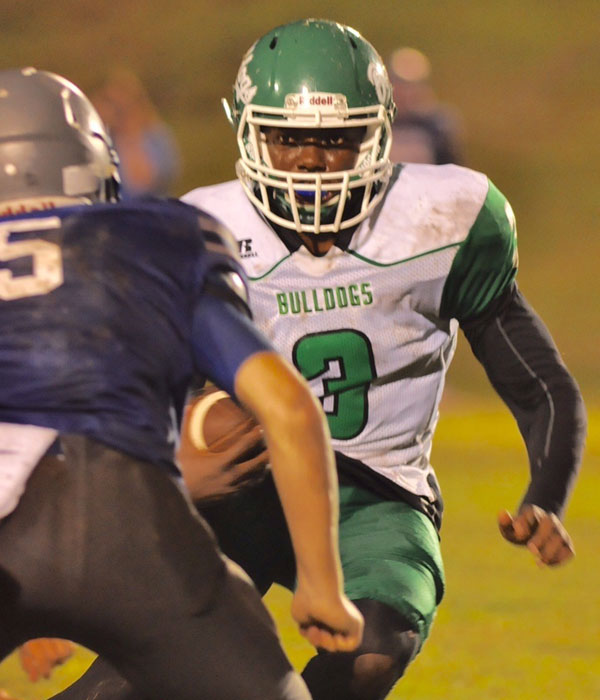 In a soggy jamboree match between the Brantley High School Bulldogs and the Highland Home Flying Squadron, the Bulldogs came out victorious at 34-14.

“It was a typical first game. We did a lot of things wrong, but we did a lot of good things, too,” said BHS Head Coach Ashley Kilcrease.

“Overall, I was pleased with everything.”

While Kilcrease says the weather and terrain played a large part in a few of the Bulldogs’ missed catches, he isn’t concerned for future games.

No points hit the board until the second quarter when junior wide receiver Adrian Person, Jr. scored the first touchdown of the game with a 43 yard pass from senior quarterback Jacob Free; no extra point was earned.

“I think it went pretty well for it to be our first game. There are definitely things we need to work on and improve on,” Person said.

“For example, the quarterbacks and receivers could use a little bit more time working together on routes and timing. As far as my expectations for our season, we can be as good as we want to be. We just have to keep working hard and play as a team.”

Following shortly behind him, junior running back Mack Wise brought the score up to 12-0 with a 42 yard run resulting in the second Bulldog touchdown; no extra point was earned.

A fumble on the play with four minutes left in the second quarter gave sophomore running back Tyler Booker the opportunity to recover the ball and bring the Bulldogs’ score up to 19-0 with no extra point.

“We had to burn some timeouts early, and not getting people on the field on punt and punt return kind of hurt us, but Highland scored right before the half and stayed in the game, to their credit,” Kilcrease said.

In the third quarter, junior wide receiver D’Andre Sinclair scored a touchdown with a 32 yard pass from Free and completed a two-point conversion for the Bulldogs, bringing the score up to 27-7.

Bringing it home in the fourth and final quarter, Wise completed a 14 yard run, gaining a touchdown and securing the extra point with a kick from Free. The Bulldogs left the field triumphant with a score of 34-14.

This week, the Bulldogs will hit the practice field to gear up for their upcoming game against Strauhgn High School, and Kilcrease already has a few ideas on how to bring their A game.

“We need to do a better job of rotating people in and out, playing more guys. We need to make sure that we’re fresh for the fourth quarter,” Kilcrease said.

“This week, we’ll have to add special teams into the mix, which makes it a little bit different. We expect a really good game Friday.”

This week, the Bulldogs will face off against the Tigers at Straughn.

“Straughn will have some more guys than Highland; they’re going to be a little bigger than we are as far as number of players,” Kilcrease said.

“They’ll be more physical upfront, Straughn’s always been known for that. We have to be ready to play and hang with them.”