After keeping a 1794 Columbian Centinel newspaper in wraps for the past six years, Crenshaw County Emergency Management Agency Director Elliot Jones decided to donate his piece of history for viewing at the Luverne Public Library.

“I bought if from a dealer out of Boston,” Jones said.

“I initially wanted to flip it, but I held on it. It grew on me.”

Jones says the document will be kept as a family heirloom.

“I decided to donate it to the library, so that everybody can see it,” he said. 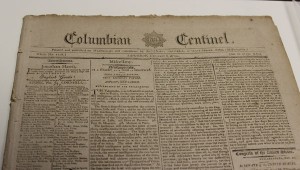 This 1794 edition of the Columbian Centinel can be found on display in the Luverne Public Library, and features correspondence between George Washington and John Adams. (Photo by Shayla Terry)

The newspaper features a correspondence between then President George Washington and Vice-President John Adams. The paper is four pages in length.

Jones says he presented his idea of putting his paper in the library to Mayor Patrick Walker.

Jones offered the newspaper to the library and Library Director Kathryn Tomlin accepted. Walker and the city agreed to have the newspaper encased for viewing.

“We are honored that Elliott would donate this historical document to the library,” Tomlin said.

“Having a newspaper dated December 6, 1794, with a letter written by Vice President John Adams to President George Washington is extremely rare due to its age, condition and value.”

Jones’s newspaper was viewed by employees of the Alabama Department of Achieves and History.

“It’s great to see it in such good condition.”

Jones says that the newspaper will be displayed in the library for as long as they would like to keep it.

“I’ve just had it put up all these years,” Jones said.

“Now the whole community can enjoy it.”