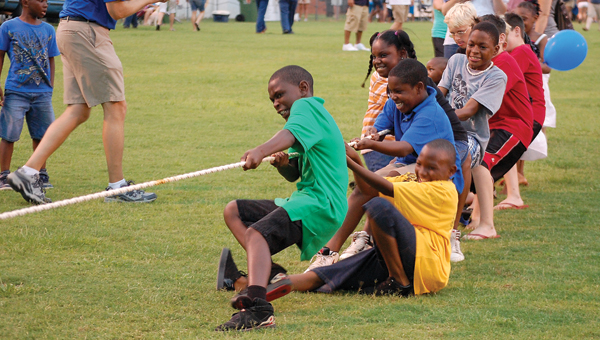 Tug of War was one of many games played at Tiger Stadium during Monday's "Celebrate America." (Advocate Staff/Andy Brown)

After a year hiatus, the Greenville Area Chamber of Commerce brought back its Fourth of July celebration, and the community showed its appreciation by filling Tiger Stadium. Approximately 1,000 people attended the celebration.

“It was a great community event,” Wasden said. “We had a wonderful turnout. The stands were full and we had people spread out on the field. We even ran out of parking. When the police officers told me that, I thought, ‘Well, that’s a good problem to have.’”

The event, which was held on July 4 for the first time in a number of years, featured games, food and music, and was capped by a fireworks display designed by Night Magic — a company that has handled the Montgomery Biscuits’ fireworks displays in the past.

“I really think having it on the Fourth was a huge plus,” Wasden said. “With the Fourth being on Monday, even if people went out of town, they were back in town Monday night for work on Tuesday, and were able to come out and be a part of the celebration. I think it was a wonderful event and we had a lot of support from the community.”

Admission was free, thanks in part to a $5,000 allocation from the City of Greenville to the Greenville Area Chamber of Commerce to help offset the cost of the event, but the money collected from food sales will go to the Chamber and be used for the purchase of a new City of Greenville display.

Wasden said a final dollar amount from concession sales had not yet been calculated.

“We have an older display, but it needs updating,” Wasden said. “It’s something we’ll use to promote Greenville at our annual expo and when we go to the Capitol.”

Wasden said the key to the event’s success was the hard work of many in the community.

“You can’t do something like this in a small community without everyone pulling together,” she said. “I want to give a special thanks to David Norrell, Caleb Gardner and James Packer, who served on our Celebrate America committee and really worked hard. I’d also like to thank the Chamber Pages and Camellia Girls for their hard work, and the City of Greenville for helping put everything together. I just really appreciate everyone’s show of support and their help in making Celebrate America such a great event.”